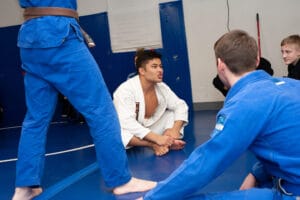 Josh has been training Jiu-Jitsu since 2008 and in that time has competed and won all over the country. He is currently a 16x IBJJF gold medalist and a black belt under UFC veteran Kyle Watson.

Since opening HeadnodHQ in 2015 Josh had made it his goal to bring world class instruction to southern Illinois. It’s been said that Josh loves HeadnodHQ more than Kanye West loves Kanye West.

“I really want HeadnodHQ to be a place where people come in after work, get a good workout, and have a blast doing it.” -Josh